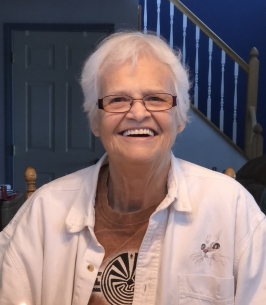 Darla Marie Carlson, age 77, a resident of Siren, WI passed away peacefully on November 19, 2022 at Regions Hospital in St. Paul, MN after a lengthy battle with kidney disease.

Darla was born on May 23, 1945 in Duluth, MN to parents Adlyne and Gordon Thoreson. Darla was raised in Proctor, MN. She marched in the Orange Bowl Parade as a proud member of the PHS Moody’s marching band in 1961. She graduated from Proctor High School in 1963.

Darla married the love of her life, Gary Carlson in 1963.

Gary was member of our US Air Force. He was transferred to Greece soon after their wedding, where Gary Jr (Tiger) was born in March of 1965. From there they moved to Fort Bragg AFB in North Carolina where Tracy was born in December of 1967. She continued to travel during Gary’s deployment. She spent a year in Duluth taking care of her 2 kids on her own while Gary was in Vietnam. They moved to Minot AFB in North Dakota for 3 years then on to Offutt AFB in Nebraska. Once Gary retired from the Air Force they moved to Burnsville, MN.
Darla worked at Western National for over 20 years, retiring in 2004 when they moved to Siren, WI and built their retirement home on a lake.

Darla was an active member of the Trinity Lutheran Church in Falun, WI.

Her greatest joy was her “bebies.” Darla enjoyed every minute she could with her kids, grandkids and great grandkids. Playing games with everyone was a highlight in her life and ours. She was very artistic and an avid crafter. She enjoyed ceramics, fimo clay sculpting, painting and stamping.

Darla is preceded in death by her father, Gordon; and brother, Gordon Jr.