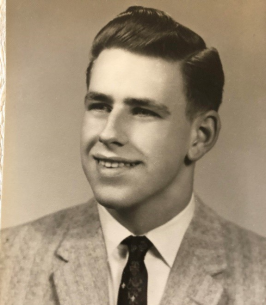 Dave was the second of two children born to Donald & Deloris Lawrence in Eau Claire, WI. During his youth he and his sibling Diane enjoyed many fun and rememberable times at the lake home with friends and family. Dave graduated from Regis High School in Eau Claire on the 3rd of June 1960. He later attended the University of Wisconsin for approximately 1 year leaving college to pursue life as a family- man. Dave met Bonita “Bonnie” L. Tallman from Chippawa Falls, Wi and shortly thereafter married in 1964, having 4 children David Donald II, Kim, Jason & Troy. During this time, he was employed at 3M in St Paul, MN in the R&D Department while also becoming an apartment manager of a small complex in St Paul, MN off White Bear Ave. He would later seek employment at North Star Steel where he would remain until retirement. Dave was an avid participant with the Steel Workers Union and Democratic-Farmer-Labor (DFL) Party.

On May 10, 1980, he would remarry, to his last true love Veronica “Roni” A. Meehan who passed away on September 14, 2014, at the age of 69, Mother of Dennis, Jeffery, Richard, and Michelle “Mickey”. Dave was a loving husband and father, grandfather of twelve grandchildren with one great-great grandchild.

Through the years Dave and Roni built a beautiful life together building a home in Vadnais Heights, MN, later moving to their retirement home located in Voyager Village located in Danbury, Wi.

Dave was an affluent golfer and even won the Geritol Challenge at Voyager Village; he enjoyed family golfing tournaments with the boys, a little fishing, and a little one-on-one time with each of his children. His interests included: photography, chess, cribbage, card games including running the Texas Hold Em tournaments at Voyager Village, woodworking, family genealogy research and the invention of the “Tip Up Flag” for cocktails which not only served a purpose but provided a good shot of humor as well.

Through the years Dave influenced several lives from loved ones to cherished friends, so many along his life’s journey. Know that he had a wonderful life, and he is never far away for he is always with us in spirit.