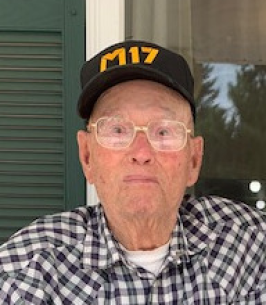 Dwaine was born on February 19, 1926 in Ira, Iowa. The fourth child of five children born to Benjamin & Mae (Whitehead) Bentley. In 1936 the family moved to Hertel, WI. Dwaine missed his high school graduation in 1944 as World War II and Uncle Sam had called, he proudly served in the Navy aboard the USS Merriweather. When his navel days were done, Dwaine spent a few years traveling and doing odd jobs in Iowa and the Dakotas until Wisconsin called him back.

In 1951 Dwaine reconnected with his high school sweetheart, Marie Christner and the two were married on July 14th in Pine City, Minnesota.

The young family spent a few years working and living in Minnesota and Alaska but by 1960, returned to Wisconsin and settled in the A&H area of Scott township.

Dwaine was employed by the Burnett County Highway department for 20 years and retired in 1984. With the kids all grown, Dwaine and Marie enjoyed many years of retirement while visiting family, traveling, camping and playing cards.

Dwain was an avid sportsman who was always ready to get a line in the water… especially when it was frozen. With help from Mike and the boys, he continued to deer hunt well into his 90s. Dwaine loved to tell stories, visit with anyone and above all, was always up for a game of cards.

There is no formal service planned at this time.