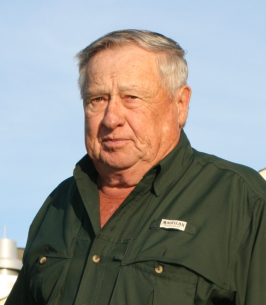 Verlin "Gus" Leroy Brown, age 80, a resident of Voyager Village, WI passed away on Saturday, April 30, 2022 at St. Mary's Hospital in Duluth, MN with his loved ones by his side.

Gus was born on July 1, 1941 in Bowman, ND to parents Herbert and Louise Brown.

After serving in the US Navy for four years, Gus worked as a building contractor throughout the rest of his life. He and his business partner, Bill Hanninen, moved to the area and started Northland Builders Inc in 1971. They constructed and remodeled numerous homes in the Burnett County area. Often receiving emergency calls late into the evening and on weekends, he was always there to help fix a pump, board up a broken window, or help with whatever was needed.

Gus took as much pride in his family as he did his work. As an avid sports enthusiast, Gus was a huge supporter of his kids, grandkids, and great-grandkids in athletics, even attending games across the country. You would often see him at the rink, in the stands, on the sidelines, or at the course. He brought fun to every family event.

Gus was also very involved in the Voyager Village Community as a member for 50 years. He constructed and donated the playground set that stood in the park for 40+ years that entertained kids and adults alike. He and his wife, Nancy, loved golf! They were especially involved with the development of the junior golf program and introduced multitudes of golfers to the Voyager area as co-hosts of the BGT for 20 years.

Gus is preceded in death by his parents; brother, Duane Brown; and his daughter, Deborah Lynne.