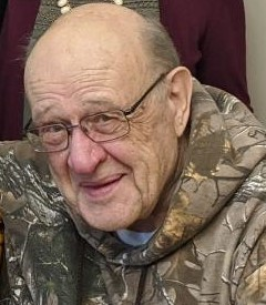 JAMES FREDERICK HANSEN
Jim was born on February 13, 1936 in Waupun, WI to Charles Titus and Flora Elizabeth (Schuirmann) Hansen. God called him home on May 26, 2022 at his home in Princeton, MN after a short illness.

Jim lived in Waupun, WI, Aurora, WI and Chicago, IL during his youth. He graduated from Waupun High School in 1954. He joined the National Guard as a medic that same year and served for 8 years, achieving the rank of Sergeant (E5) and earning special recognition as Sharpshooter (rifle) and Expert (BAR).

For most of his career, he worked in the automotive parts aftermarket, first as a counter man at Automotive Sales and Service, Inc. in Fond du Lac, WI where he met his future wife, and later as a sales representative, working for P.E. Weber, Inc., an automotive warehouse distributor in Milwaukee, WI. He married Jean Carol Henslin Hoffmann on May 19, 1962 in Fond du Lac, WI. They relocated to Aurora, WI shortly after they were married and remained there until they relocated to Princeton, MN in December 2018 to be closer to family. Jean preceded him in death on May 20, 2021.

In addition to his parents and his wife, Jim was preceded in death by his four-year-old daughter Jodi Lyn Hansen, two sisters-in-law, Gloria Prink and Judy Hoffmann, brother-in-law Wayne Prink, niece Nancy Hoffmann and his cousin Robert Westman, who was more like a big brother, and his wife Elizabeth Westman.

Jim was a caring husband, a wonderful father, a devoted grandfather, and a loving great-grandfather. He also loved the Lord and would boldly ask people he encountered if they had a personal relationship with the Lord. He was very active in the Dickinson County Chapter of The Gideons International, participating in their prison ministry, distributing testaments in schools, visiting churches to share their mission and serving as a chapter officer. He served as a lay-pastor for many years at Florence Bible Church and Dunbar Community Bible Church. He was also very active at Aurora Free Church, serving in various capacities including Sunday school superintendent and teacher, deacon, brotherhood member and handyman. He loved studying the Bible, especially prophecy, and longed for the return of Christ.

He was very self-sufficient. He liked to joke that he was a jack of all trades, master of none. He learned electrician skills from his father in the family business Hansen Electric. He was a self-taught carpenter, and he could also fix anything mechanical. He used his various skills to bless his family, friends, and neighbors.

He also enjoyed a good adventure, as long as he could drive to it. Flying was not for him. Family vacations took twists and turns as he would study the map each evening often changing direction to see something that caught his eye. In retirement Jim and Jean enjoyed winters in the warmer climates, staying in Dallas and San Antonio, suburbs of Phoenix and also traveling around the south like nomads for two winters. He remembered every place they visited and the route they took getting there.

According to his wishes, he was laid to rest in Aurora-Homestead Cemetery in a private graveside service on June 2, 2022. A memorial service to celebrate his life and heavenly home-going will be held at 11AM on Saturday, June 18, 2022, at Berean Christian Fellowship in Zimmerman, MN.

Romans 5:8 God shows His love for us in that while we were still sinners, Christ died for us.