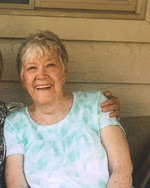 Patricia Jane (Simonson) Carey age 91 of Grantsburg Wisconsin passed peacefully at home June 18, 2022 with the love of her family surrounding her.

Pat’s best joy in life was her family, she enjoyed life with a wonderful sense of humor and loving spirit that always made her family and friends love her and laugh. As a child Pat’s best friends were her sister’s and brother with her brother and her being the best of friends and partners in childhood shenanigans that often got them in a bit of trouble but made for many laughable memories.

Pat got her first job at age thirteen as a waitress at the Athletic club in downtown St. Paul Minnesota, working there for several years to help with her family's household income and to have some spending money for herself during her junior and senior high school years.

Pat met Bill Carey (Deceased November 21, 1997) when she was a fifteen-year-old high school girl at Marshall high school in St. Paul Minnesota. They were united in marriage July 31, 1948 at the Cathedral in St. Paul Minnesota. To this union seven children were born. Cookie (Jerry) Klein, Billy (Barb) Carey, Candie (Mike) Carey, Randy (Heidi) Carey, Tammy (Mike) Linquist, Mike Carey, Laurie (Friend, Dan) Sjodin. Fifteen grandchildren, Twenty-six great grandchildren. After marriage Bill and Pat lived for a time in the Cathedral Hill area and in 1953 bought their first home at 899 Ashland in St. Paul Mn. where they raised their children until summer of 1969 when they moved with the four youngest children to Little Wood Lake in Grantsburg Wisconsin.

Pat raised her children with all the love, care and good example of being the best mom ever. In 1979 Bill, Patty and son Randy became business owners and opened a Ben Franklin Store in Grantsburg Wisconsin on Main Street and later in Siren Wisc. They enjoyed this time as Business owners and gradually as time went on Bill & Pat brought a second home and spent three – four winter months in South Texas. In the late 1990’s Randy became sole owner of the business, when Pat retired as a business owner.

Pat is survived by her children, grandchildren, great grandchildren, Sister-in-Law Charlotte Simonson, many nieces, nephews and other family members. Pat remained strong in prayer and in faith until God took her home.

A Celebration of life Service will be held July 31, 2022 at Faith Lutheran Church in Grantsburg Wisc. 2:00 in the afternoon with visitation one hour prior to service.