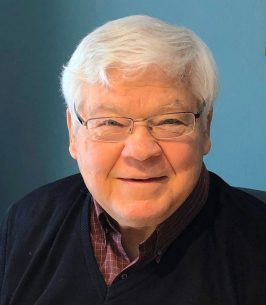 Richard L. “Dick” Welshons, 79, a resident of Fridley, MN, passed way in his home on September 18, 2022, after a six-year battle with kidney cancer. He is survived by his loving wife of 55 years, Mary; daughter, Kristin (Bruce) Williams of Lino Lakes and son, Brian Welshons (Carole Vit) of Albertville; granddaughters, Hailey, Abbigail and Gabrielle Williams; mother-in-law, Martha Serbus; and many other relatives.

He is preceded in death by his parents, Raymond and Viola Welshons; brother, Raymond Jr.; and many other relatives.

Dick was born in Runnells, IA, and moved with his family to Spring Lake Park, MN, when he was a junior in high school. He graduated from Spring Lake Park High School, then attended Dunwoody Institute where he graduated as a Journeyman Plumber, and later furthered his schooling to become a Master Plumber. His plumbing career included 20 years at the University of Minnesota, Plumbing Inspector for the City of Minneapolis, and Fabrication Manager at SPS Plumbing, before ending his career at United Defense in Fridley.

On June 3, 1967, Dick was united in marriage to Mary Louise Serbus at Sacred Heart Catholic Church in Franklin, MN. They began their married life together in the Twin Cities and for the past 51 years have resided in Fridley.

Some of Dick’s many passions included fishing, hunting, boating, camping, traveling, gardening, being a handyman for his neighbors and friends, assisting his brothers-in-law with harvesting, visiting and playing cards with family and friends, and for the past 20+ years he and Mary were actively involved in the lives of their three granddaughters. When Dick was no longer able to participate in his hobbies, his new passions included working on jigsaw and word search puzzles, along with observing the many birds and animals outside his bay window.

A Mass of Christian Burial will be held on Friday, October 21, 2022, at 11:00 AM (visitation 10:00 – 11:00 AM) at the Church of Saint William in Fridley, with a lunch following mass. Interment will be held at a later date. Mass may be viewed via live stream at chofstwilliams.com.