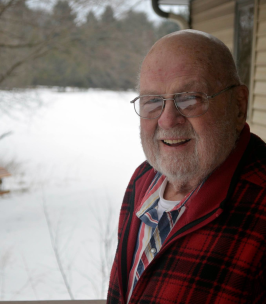 Robert Lindemyer, age 96, passed away peacefully with his family by his side on March 2, 2022, in Webster, Wisconsin.

Robert was born to Emily and Louis Lindemyer on February 17, 1926, in Douglas County, Minnesota.

Robert served in the the United States Army. He enjoyed tinkering with and fixing various things around the house and property. He enjoyed the outdoors, whether it be fishing, hunting, or just watching the birds, or the occasional bear, in his backyard through the sliding glass door. He also had a strong love for camping and traveling with his family.

He is preceded in death by his parents, Emily and Louis Lindemyer; wife, Violet Lindemyer; and son, Richard Lindemyer.

Robert leaves to celebrate his memory, his daughter, Cindy Lindemyer; and his granddaughter, Jessica Lindemyer.

There are no formal services planned at this time.

The Swedberg-Taylor Funeral Home in Webster, Wisconsin was entrusted with arrangements. Online condolences can be made at www.swedberg-taylor.com.