Obituary for Robert A. "Dake" Smith 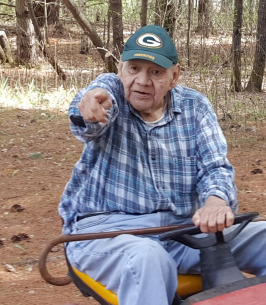 Robert Allen Smith died April 2, 2022 in his hometown of Webster surrounded by his family. Born on March 1, 1942, Bob (Dake to many) was glad to celebrate his 80th birthday with root beer floats and cupcakes for everyone.
He graduated from Webster High School, served in the Air Force, and worked for several years in the Merchant Marines on the Great Lakes. Returning to Webster he found joy in being with his wife, Elaine Burton Smith and being surrounded by her children and grandchildren for over 30 years.
A friend to all cats, dogs, and other animals notably his childhood companion called “Boy Dog”. Also many, many cats over the years, including current companions Phoenix and Milo. He always lit up when his nieces dog, Rocky would visit him in the hospital or at the rehab centers.
Bob often could be seen riding his bicycle or mowing the grass in and around Webster. He was always willing to work and enjoyed going out to his home place on County FF to work on his various projects and was always planning the next project, often for those around him. He was known for his ability to fix just about anything from furniture to bicycles. He loved the Packers, trains, his lifelong stamp and coin collections, going out to harvest wild rice and to tell stories.
He was so appreciative of all those that cared for him and those that served in the military.
Bob overcame many obstacles to live a full and blessed life, often surprising those around him with his resilience and will.
Bob is survived by his wife, Elaine Burton Smith and her children, Donna DeMarre, Brian Burton, and James Burton; grandchildren, Cheyanne, Annisa and Mysti DeMarre, Aeva Heier, Janelle, Fiona, James, Jr., Ivy and Loretta Burton; his sisters children, Robert (Carolyn) Isch, Marie (Scott) Splettstoeszer; great nephews, Will (Steff), Alan, Richard and Phil (Sunny) Splettstoeszer, John Isch; great nieces, Anita (Ryan) Troyer, Katrina Isch; great great nephew, Jayden Splettstoeszer, great great nieces, Lydia, Lucy and Ella Troyer; along with other cousins, family and friends.
Bob was preceded in death by his father, Robert E. Smith; his mother, Jessie Connor Smith and sister, Virginia S. East.
The family specially thanks the nurses and care takers from St. Croix Chippewa Tribe and St. Croix Hospice who did so much to help over the years and in his final days.
A memorial service will be held on Sunday, April 10, 2022 at 3:00 PM (visitation 2-3 PM) at First Baptist Church in Webster. Arrangements were entrusted to Swedberg-Taylor Funeral Home, Webster. Online condolences can be made at www.swedberg-taylor.com