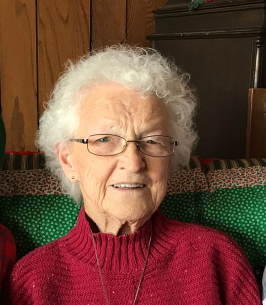 Shirley A. Bloom (Almquist) from Siren, passed away on June 8, 2022 at the age of 88 years. She was born in Lewis, WI to Ed and Victoria Almquist. She attended and graduated from Siren High School. In 1950, Melvin Bloom proposed to Shirley and they were married in 1951 in the Methodist Church in Siren. They moved to Crystal, MN where they lived for 35 years and raised their two daughters until they retired in 1986. After retirement in 1986, they moved back to Siren where they built their home on Clear Lake, after spending years of time there on weekends and summer vacations. They enjoyed their home on Clear Lake where they hosted many family and friend gatherings.

Shirley was the Christian Education Director at the Methodist Church in Crystal for many years. As her daughters got older she worked part time at A.C Carlson Furniture in Crystal. She was also a member of the American Swedish Institute in Minneapolis. Mel and Shirley enjoyed many vacations together with friends, especially five trips to Sweden to meet and get to know extended family. Those relationships have continued even today.

After retiring to Siren, Mel and Shirley became very active in the Siren United Methodist Church serving on various committees and helped raise money to build a new sanctuary. Shirley was President of the United Methodist Women for many years, she organized the annual Scandinavian Dinner, German Dinner and the Pie Social.

In 2005, she became a Group Leader for Diamond Tours and enjoyed many trips and met many wonderful friends. Her daughter Barb, joined her as an Assistant Group Leader in the later years, she enjoyed those trips so much. Even when she couldn't travel with the group anymore, she still followed their daily itinerary as they traveled.

Her love for her family was endless. She loved making lefsa, Swedish meatballs/sausage and sugar cookies with her granddaughters. She always made extra Swedish meatballs so everyone could take some home with them. They also enjoyed sewing quilts together.

She is preceded in death by her husband, Melvin and all her siblings.

Arrangements were entrusted to Swedberg-Taylor Funeral Home, Webster, WI. Online condolences can be made at www.swedberg-taylor.com.