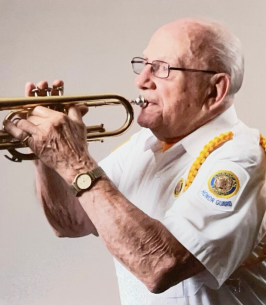 Bill was born in Baraboo, Wisconsin on December 7, 1928 to Fred and Pearl Terbilcox.

He attended the University of Wisconsin-Madison where he earned his Bachelor’s degree. He married Dolores “Lory” Ring on October 27, 1951, at St. Luke’s Catholic Church in Plain, Wisconsin. He served in the U.S. Army as a First Lieutenant and was honorably discharged in 1961.

Bill was a corporate officer for MSI Insurance Company, an active member of Voyager Village, as well as the Sacred Heart community. He considered it one of his greatest privileges to have played Taps for many years for his fellow veterans. Bill began playing Taps during World War II at the age of 13.

A memorial mass will be held on Thursday, November 17, 2022 at 1:00 PM (visitation 11-1) at Sacred Heart of Jesus & Mary Catholic Church, 28460 Co Rd H, Webster, WI. Luncheon will follow mass. He will be interred at Northern Wisconsin Veterans Memorial Cemetery in Spooner.

In lieu of flowers, please consider a donation to St. Judes Children’s Hospital, Shriner’s Hospital, or Priests for Life.